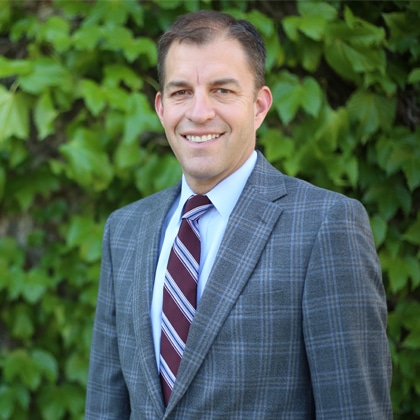 Steve Bult is an alumnus of Calvin College, where he received his B.A. He then received his M.A. from Governors State University. Steve began his career in education as a Social Studies teacher in California. He then went on to serve as a teacher, Assistant Principal, and Principal at Chicago Christian High School. During these same years, he was an Adjunct Professor at Trinity Christian College. In 2006, Steve accepted the position as Principal at Wheaton Academy in West Chicago, IL, and then transitioned into the role of Associate Head of School there in the fall of 2017. In August of 2018, Steve became the 39th Head of School at Wheaton Academy. With 28 years of experience in Christian education, Steve has used his spiritual gifts and passion to develop a Christ-centered learning community at Wheaton Academy. In doing so, Steve has collaborated with his colleagues to implement and embed the Professional Learning Community philosophy at the school. Also, his ability to communicate creatively and efficiently while integrating faith and learning has led to the development of the Living Curriculum Teacher Development Model (LCTDM™). The LCTDM™ is a teacher evaluation model combined with a system of strategic compensation for teachers.