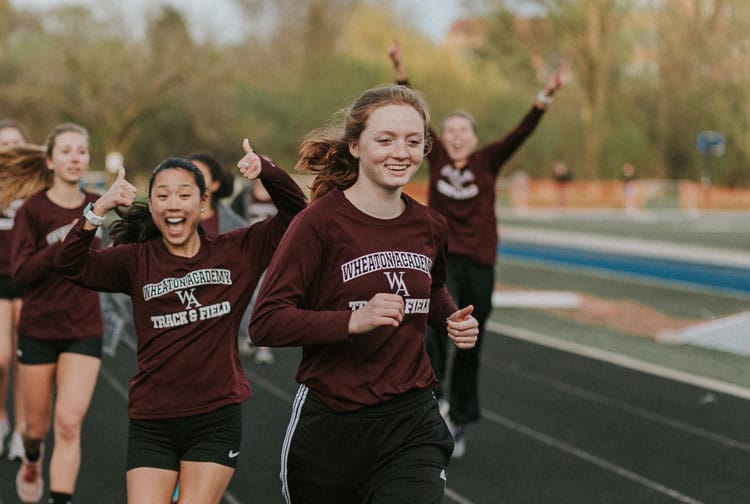 When I entered Wheaton Academy as a freshman, I had no idea the impact the mission statement and core values would have on me. Over the next four years, relationships, excellence, and service—all for the glory of God—would shape who I was becoming, and guide me in where I would go to college.

I was blessed to be a three-sport athlete, running cross country and track, and playing on the JV girls basketball team. My coaches were always discipling me and encouraging me to develop my talents in both athletics and leadership. As a result, I was selected as JV girls basketball co-captain my sophomore year, and that same year I qualified to run track at state. My senior year I faced a difficult challenge. After an injury, I had hip surgery and was out for the entire season. While I was not able to run, I was encouraged to lead in a different role and was selected as one of the captains for both the cross country and track teams. This opportunity helped me learn the value of servant leadership and putting others before myself. I will always treasure those relationships with teammates and coaches.

Winterim at Wheaton Academy also changed the direction of my life. During my freshman year, I took an aviation class. During that class I gained a passion for flying. I did not know how to process it at the time, but I now know that it was in that Winterim class that God called me to become a pilot! Once I shared this dream with other mentors and leaders, I was encouraged to look into attending one of the United States Military Service Academies. I discovered that at one of the Academies, I could pursue a degree in mechanical engineering and continue studying French.

I also went on two mission trips to Haiti during Winterim. Both of these experiences changed my heart and expanded my view on serving others and seeing God at work in other countries. I know that because of my aviation class, and the two mission trips, I felt drawn to and was accepted at the United States Air Force Academy, whose core values are “Integrity First, Service before Self, and Excellence in All We Do.”

Wheaton Academy gave me everything I needed to be prepared for the Air Force Academy and future service to my country. The rigorous academic classes, the athletic opportunities, Winterim, co-curriculars, and other service opportunities prepared me for what God has in store for me. And I thank God for the influence of my teachers, coaches, teammates . . . each of these people poured into me and helped mold me into who I am today!