Voices of Wheaton Academy
on Race and Justice 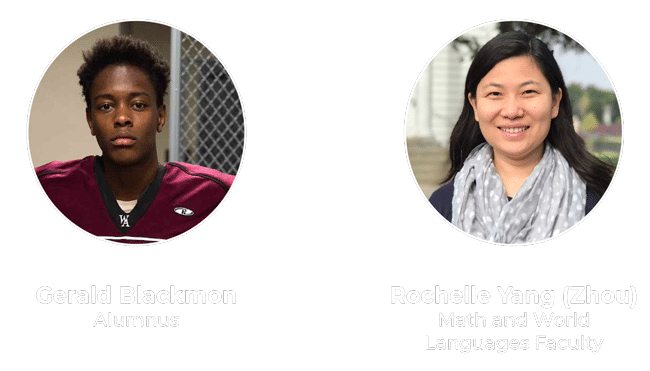 To understand an experience that we haven’t all shared takes grace. It takes empathy. And most importantly, it takes listening.

Wheaton Academy was founded in 1853 by abolitionists who wanted to start a school that would train their kids to “fight the evils of society,” specifically slavery.  Since its founding nearly 167 years ago, the Academy, along with American culture, has had its struggles with both conscious and unconscious racial bias. We acknowledge that the Wheaton Academy experience for students of color has not always been the same experience that it has been for white students. However, as we strive to become a Kingdom Community, one of the most important ways we can move forward is to listen to the many voices of those in our community.

Today we hear from Gerald Blackmon and Rochelle Yang.

Rochelle joined our faculty in 2014 to teach Math and Mandarin Chinese. Rochelle came to the U.S. from Shanghai, China and she enjoys sharing her culture, language, and stories with students in her classes.

Please share how your relationship with Wheaton Academy began.

Gerald Blackmon: My relationship with Wheaton Academy began five years ago as a young black kid looking to find a safe place to grow into a young adult. Opportunity was everywhere at the Academy, but to grasp it, I felt as though I had to take a different route than the white students I was predominantly surrounded by. At times, this was an overwhelming, frustrating, and even heartbreaking feeling. That feeling of never measuring up blinded my focus and vision from what was right in front of me, but only for a short time. In front of me were teachers and staff who were believers in Christ before their career. They exemplified Christ’s love and saw me as not just a young black kid but as a young black MAN in need of direction. I realized that I need not measure up to anyone but instead be the best version of me. I realized that teachers and staff were humbling themselves, accepting their imperfections, and seeking out to understand the eyes and heart of a young black man, to better themselves and their community. Due to their willingness to understand black men, I was able to have great opportunity and experience, but my peers were able to grow into better young men and women as well. Looking back on it, it was clear that Wheaton Academy listened before speaking, something lacking in today’s world. They took criticism and made it constructional to create a stronger Kingdom Community through their halls. Wheaton Academy’s effort to grow and learn through their imperfections is what prompts me to serve and be a part of the change they seek to be every day.

Rochelle Yang: My husband used to work at an inner-city Christian School, and he heard about Wheaton Academy at that time. A few years later, we met a few people who graduated from Wheaton Academy while we were thinking about relocating. We did some research and drawn by the mission of Wheaton Academy “to nurture growth in students through relationships, excellence, and service to the glory of God.” We are grateful that the Lord opened the door to us and lead me to serve as a teacher in this community.

Wheaton Academy exists to advance God’s glory, and as Jesus taught us to pray “Thy kingdom come – on earth as it is in heaven,” we seek to be used by God to build that kingdom here on earth. How can we advance God’s glory in the midst of national unrest and uncertainty?

Blackmon: Wheaton Academy can advance God’s glory by investing in their students and the children of the next generation. Each student involved in the community of the Academy is a heart that can be touched and influenced in positive ways. In a world of unrest and uncertainty, reminding them of their responsibility to be the positive Christ-like change the world needs is a significant first step. Students must realize that they have the answer to the current world’s feelings of fear, stress, and anxiety. That answer is Jesus Christ and his love. Does this mean every student needs to go out and preach to the nations, absolutely not! Yet, one of Christ’s primary principals is LOVE. God calls us to love our brothers and sisters regardless of race. Having a heart that seeks to understand the world we live in and understand those of different cultures and beliefs is an easy first step that the next generation of young men and women must grasp. Be willing to love and understand.

Yang: As a Christian, it was hard for me to see the unrest and uncertainty that our nation faces in the past few weeks. I believe that God didn’t cause evil, pain, and destruction. But He exposed these injustices in front of the believers and calling us to change. He is calling us to make some real changes. I believe that we can advance God’s glory by having meaningful conversations, by serving, and by praying. Having meaningful discussions help appreciate the complexity of the truth and understand the brokenness of this world. Serving people in our community provides us an opportunity to know our neighbors and their stories. Praying allows us continuously seeking wisdom from God and build God’s Kingdom in unity.

How do you see the murder of George Floyd, and the subsequent national protests, affecting the Wheaton Academy community?

Blackmon: I see current events truly affecting the student body. Many children are shown images and videos on social media. Most of the time these videos and images can push things towards one narrative. Social media then becomes a failure for the young generation who are quick to follow the majority. Just challenging students to speak to their parents and peers about issues on injustice and current events is important. Challenging them to keep from posting negative things on social media is another key thing. Finally, asking students to not look at their peers in a certain way because of what a video may have said about their race or kind would be community changing. Young men and women are going to joke and be playful but holding them to those standards are the things that are going to be what keeps them in light to be the change the world needs. Students must put themselves in other shoes so that understanding and growth can occur.

Yang: I think the students in our community are confused because there is no place for them to hear the “cool-headed” discussions on the real issues. I do believe we need to facilitate some discussions among our students and bring in speakers with different worldviews to have some ongoing discussions together. Outrage does not equal truth and justice. We must teach our students how to respond to and engage in real-world issues through conversations and services.

Wheaton Academy was founded by abolitionist parents who were seeking to provide a biblical worldview for their kids and train them to “fight the evils of society at that time,” predominantly slavery. What can Wheaton Academy do to continue the fight against today’s “evils of society,” such as racism and bigotry?

Blackmon: Wheaton Academy can do many things to fight against today’s “evils of society.” The Academy could empower and implement a small program, unannounced to students, with primary focus on reaching out to minority students. This program must be led by staff and teachers of all races. Unlike Kairos, it doesn’t need to be a major program but is something that encourages emphasis on showing grace and love to those students, giving them the confidence they need to feel accepted and loved in their current communities. Pastor Jackson did something similar in my senior year, just pulling students aside. Pulling students apart and asking them hard questions about their community is something to avoid. It should seem as though it is a mentorship. The same should be done for white students and all students honestly. Ask students to speak as freshman so that the hope for change doesn’t occur when they are juniors and seniors, but even earlier. Students should learn that racism is a heart issue. It is something that can’t just be changed with physical activity but something that can be changed with internal awareness. Wheaton Academy should challenge students to embrace others different than them respectfully, and like the Human Dignity policy states, consequences must occur if they cannot do so respectfully. Although all of my suggestions may already be in place, consider the emphasis that must be taken on them going into this current school year. LOVE.

Yang: We must admit that racism and bigotry still exist in this broken world. But I’m afraid I disagree with many of the statements made by news outlets and protesters. Empty slogans and hypocrisy cannot fight racism and bigotry. They don’t solve any problem. We need to seek truth in God’s words and do real work to connect with people in various cultures and serve different communities.

Would you share your heart’s prayer for the Academy?

Blackmon: I just pray that the academy continues to seek growth and change in their community. I pray they take advantage of the opportunity they have to breath Christ like love into the bodies of their students. Wheaton Academy is a special place as the devil is taking steps towards destroying believers and Christianity in America every day. We must win!

Yang: David Tripp said, “From the moment of creation, human beings were created to be dependent, first on God and then on one another.” I pray that God will search our hearts and remove all the pride, hate, violence, and discrimination; and unite all of us.

We are thankful for the perspectives from our Wheaton Academy community. We honor these voices for their honesty and willingness to share so openly. And as we continue striving to be a Kingdom Community, we will continue to listen.

This post is the first in a three part series titled “Voices of Wheaton Academy on Race & Justice.”