As a freshman, Crystal Thomas ’12 helped the Wheaton Academy girls soccer team claim a state title in 2009. Over the course of her high school career, the WA girls team earned three Class 2A super-sectional and sectional titles (2009-2011) and four regional titles (2009-2012). During her senior year, Crystal had 17 assists and tied the school record of 36 goals.  She now has her own Wikipedia page following her stellar collegiate accomplishments and the launch of a professional soccer career.

More importantly, however, are Crystal’s steadfast faith and trust in God through the challenges of the secular sports world. Crystal is grateful to her parents for making it possible for her to attend the Academy. She was surrounded by gospel-centered teaching, encouraging peers, and excellent staff. Wheaton Academy prepared her academically for college and set a spiritual foundation that would prove to be essential in the years to come. 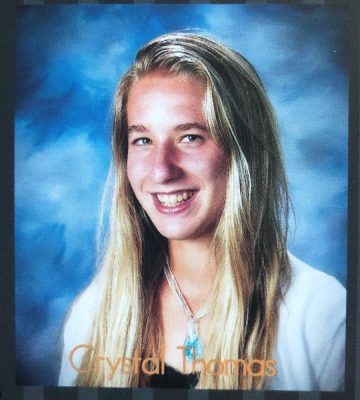 The Academy soccer program had a significant impact on her faith, friendships, and soccer career. After leaving Wheaton Academy, Crystal attended the University of Notre Dame, where she enjoyed the collegiate football experience and played soccer for two years while developing deep friendships and understanding of other faith traditions.

After her sophomore year, she transferred to Georgetown University in Washington, D.C., where she was blessed by a vibrant Protestant campus ministry and faithful church teaching that grew her faith immensely.

During this time, Crystal’s faith was tested, and she more clearly understood the reality of her sin and God’s great power and love to forgive us our sins via the death and resurrection of Jesus Christ. As a result, she was baptized during her senior year.

Following graduation, Crystal played a fifth year of collegiate soccer while starting her master’s degree. The Georgetown women’s soccer team made history that year by winning the Big East Conference Championship for the first time in school history and advancing to the NCAA final four college cup. Crystal scored the game-winning goal against Santa Clara to put the team into the finals.

Shortly after that, she was invited to the United States Under-23 Women’s National team (the pre-Olympic team) and was tested against the best in the country in her age group.

After much effort, support, personal belief, and perseverance, she signed her first professional soccer contract in the spring of 2017. Since then, she has seen God work in her life and the lives of others through soccer. He has provided in unexpected ways, allowing her to experience His joy while playing, accomplishing her goals, and being challenged through difficult experiences.

God has allowed Crystal to play professional soccer seasons in Iceland, Australia, Norway, D.C., and Orlando. He opened doors to join and be encouraged by amazing churches and saints all over the world, tangibly showing that He is always with her. Crystal even met her husband, Sam Spivey ’10, through the game of soccer.

On May 4, 2022, Crystal signed with the Scottish Women’s Premier League team Hibernian ahead of the 2022–23 season. Sam and Crystal will be headed to Scotland this summer. She is mindful that God’s hand has been on her through the highs and the lows, including tough times when Christianity was considered less than popular on her teams. After all this, Crystal is reminded that she is saved not by any good she has done but by the grace and mercy of God.

Growth Through the Process